Easy to use and fills the room with a relaxing and soothing scent.

Easy set up and great product ! The scent diffuses very well in the room and immediately after powering on.
Only complaint is that it consumes too much essential oil ! Loving it at the moment.

Don’t let the size of this fool you. The instructions are quite funny, but otherwise easy to assemble. I usually just turn it to just beyond the on as it’s really very powerful. I was initially worried it’ll use a lot of oil, but it’s not used up as fast. I bought a normal diffuser from Goodmart years ago which still works well but having to change water & top up the oil was troublesome as I used to use it for 3 hrs at least continuously and the oil smell won’t be as strong anymore. In comparison, the nebuliser uses lesser oil because I don’t have to keep topping up the oil during each use and it doesn’t take as long to fill up the room. 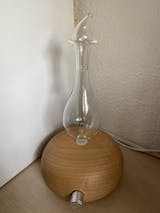 Beautiful diffuser and fast to disburse the scent